A common question, to which it is hard to give one single answer, since it depends on a few factors such as temperature and daily schedule.  Everyone is aware, however, that the most challenging situation for a nodal battery is to record 24 hours a day in the extreme cold of northern Alaska.

Accordingly, this past winter, over 400 SmartSolo IGUs were tested on a proprietary project on the North Slope.  They were deployed in early March, in 24-hour recording mode, on 2 typical receiver lines, and were left turned on until it was certain that all the batteries were drained.  They were then offloaded and the total recording times analysed.  The temperature and battery voltage curves were also extracted from the units’ QC data.

How did SmartSolo perform?  The results speak for themselves… 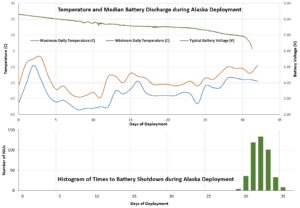 A proven autonomy of a full calendar month in the Alaskan winter, from a battery module which weighs just 585g including the spike, represents a breakthrough in nodal technology.

For all users of SmartSolo, this result will help boost confidence in the system’s performance – and for most users will mean that the answer to the original question will be: “More than enough…!”.